Mergers and Acquisitions – What it Means to Your Business 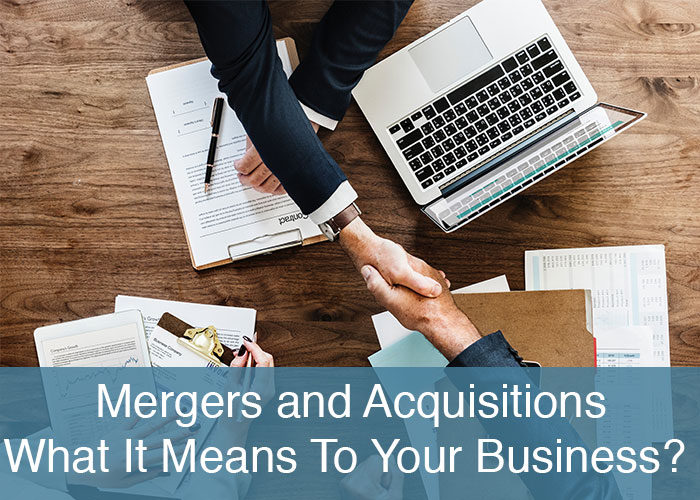 Mergers and acquisitions are an integral part of how industries are shaped. They can allow smaller companies to better compete with larger established companies or consolidate market share to increase profits. Being acquired can also offer a smaller business a less costly route to become a public company.

The terms, merger and acquisition, are often used interchangeably but they do not mean the same thing.

Mergers often involve two companies reaching an agreement where one merges into the other.

An acquisition is where one larger company acquires the majority stake of a smaller company with either cash, stock or both. In an acquisition, the acquired company retains its name and structure.

In both mergers and acquisitions, the company merging into the other company or the one being acquired is referred to as the “target” company.

What kind of mergers are there?

There are many different types of mergers. No two deals are exactly alike, but there are few common scenarios which dictate what kind of merger is occurring.

Listed are a few types of common mergers.

How does an acquisition work?

Acquisitions typically allow for the continued existence of the target company. However, in certain cases, especially with the acquisition of assets the company will only exist on paper. When Company A buys all of Company B’s assets, Company B will only have cash. With everything liquidated and no legitimate business area, the company, if it is public, will become a shell or it will have to enter into another area of business.

What is a shell company?

Lastly, Shell companies offer an interesting type of merger/acquisition. Public shells often exist dormant on OTC markets (Over The Counter Markets). These companies are typically waiting to be acquired by a prospective buyer for the purpose of a Reverse Merger.

What is a reverse merger?

A Reverse Merger allows a private company with the desire to go public to avoid going through the IPO process. What typically happens is the private buyer will purchase the shell and merge the private company into the public shell, becoming a reporting public company.

Does your company need legal counsel?

It’s important to have good legal counsel before your company merges or acquires another company. Wilson Bradshaw LLP, has securities attorneys experienced in all aspects of mergers and acquisition deals. We work with both buyers and sellers. We also understand the importance of fiduciary duty in mergers and acquisitions matters and strive to create the best deals for business founders and shareholders.